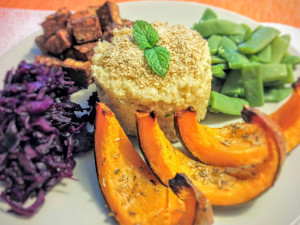 First of all Macrobiotics is a way of life, a philosophy, a way of seeing the world that has a lot to do with going back to our roots, to our union with Mother Nature, to understand that we are part of an established order whose natural rules we cannot break without suffering the consequences ourselves, as we feed on Earth. She is the one that feeds us and gives us LIFE. It already existed when we arrived and will linger on when we depart. And yet we have lost that sense of oneness with nature. We think we are the rightful owners of this planet, when, in actual fact, we depend on it. We want to dominate nature, change it at will, modify it, refine it, adulterate and sweeten all the foods that Mother Earth gives us as the children we really are. Her children.
Modern civilizations have lost contact with the organism that gives us life and nourishes us. We have gone from the symbiotic relationship of ancient peoples to a parasitic relationship without becoming aware that the poisoning of the planet is our own poisoning. Statistics speak for themselves.
Macrobiotics seeks union of humankind with their environment. It seeks to make balance, going back to the way our great-grandparents used to eat. It seeks to raise awareness on the food we feed our bodies, which becomes our blood, and nourishes our thoughts. Macrobiotics focuses on food as a force of change towards a healthy balance with Mother Earth. It relates to the Hippocratic quotation “Let your medicine be your food, and food your medicine” and it observes how, according to the laws of nature, food is inextricably linked to the health of the organisms that nourish us. Food is energy because the whole universe is. Matter is nothing more than concentrated energy: Macrobiotics describes how, in order to make balance, we must follow the laws of nature according to what in the Orient was called Yin and Yang, the two opposing but complementary forces that are part of Wholeness, infinite Oneness.
So, we will try to understand how Yin and Yang make life thrive. We will learn to prepare delicious recipes which bring back the authenticity of the most ancient flavours and try to understand where and when we went wrong so that the so called “diseases of civilization” keep growing in their numbers. I invite you to share all this soon enough.
To be continued in What is Macrobiotics? II
Tagged energy supply, health, macrobiotic, nutrition, yin and yang, yin yang