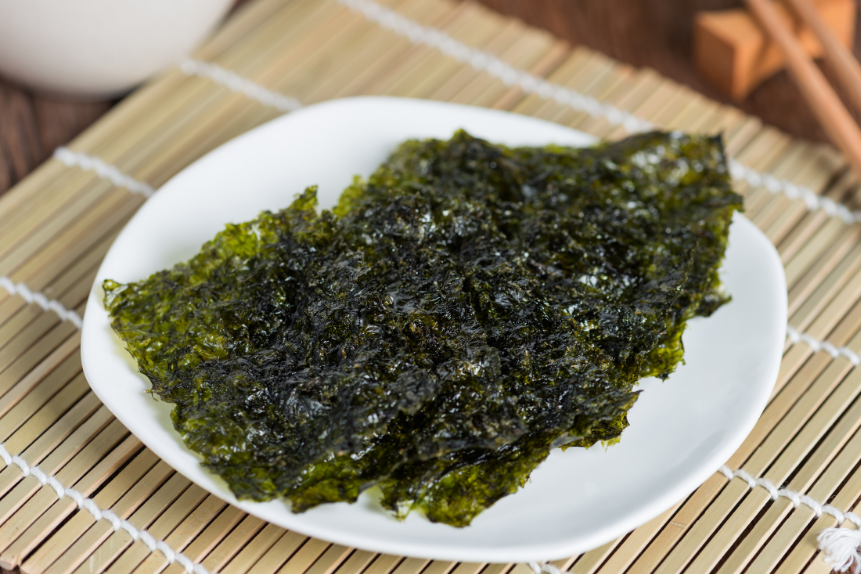 WHAT IS NORI SEAWEED?

Nori seaweed is made from seaweed of the sea lettuce family, which grows in temperate waters in different parts of the Mediterranean and the Pacific and Atlantic oceans.

Nori seaweed is very fine and soft, and its flavour is intense. When we eat it, we notice its upward and outward energy, which is why it is said to be quite yin, for a seaweed, whose drying and cooling effect is felt more in the upper part of the body.

The production process of nori seaweed is very similar to that of paper. In fact, the “only” thing that changes is the raw material and its purpose. Basically, both processes involve spreading a paste made of plant fibres on a porous surface and then extracting the moisture by pressing or heating. Unlike other seaweeds, the vast majority of nori marketed in sheet form is cultivated and comes almost entirely from Japan, where it is the mainstay of a large industrial sector.

However, many types of nori grow wild in different parts of the world and, depending on their age and degree of exposure to the sun, wild nori can vary from bright green to brown, purple, black or olive green. In the British Isles it is known as laver in Wales, soke in Ireland, slake in Scotland and black butter in Devon. Traditionally, it is cooked for a long time to a thick paste (laverbread in Wales) and used as a condiment.

In early autumn the spores are grown on the seashore in special containers and then transferred to large diamond-shaped nets, sometimes placed between bamboo grids in the water at the bottom of bays. The best growth is achieved by placing the nets so that they remain above the water at low tide to maximise sunlight, and at high tide they are regularly washed below the water level. Throughout the winter, mature plants are harvested, either by hand or by suction with a pump. Sometimes they are harvested with boats called “diving boats” because they literally “dive” under the surface nets and lift them up to facilitate harvesting.

When they arrive at the factory, they are first shredded and washed thoroughly in rotating machines and oxygen is injected to give them a softer texture. They are also cleaned of all impurities (earth, stones, debris, etc.). The resulting paste used to be traditionally dried in the sun, but now the process is accelerated by using heat in large ovens. They are dried on bamboo mats in thin layers (that is why they have a rougher and a smoother side), then peeled off, cut into sheets of about 18 cm and usually sold in packs of ten folded sheets. It is also available on the market in the form of flakes.

Nori sheets can vary widely in both price and quality. Although higher prices imply higher quality, the price of the more expensive varieties is not because the seaweed is more nutritious, but basically because the taste is subtly more delicate.

We will know that a nori is of good quality because we will see that it is well dried and has a brighter colour. When you look at it against the light, you will see green tints and generally a homogeneous texture. Cheaper and poorer quality nori are purple or purple and thick, flaccid and more uneven in texture. At an industrial level and, above all, of non-organic origin, we can find seaweed artificially dyed green or varnished with chemical products. Nori sheets are available on the market already toasted (“sushi-nori“) or toasted and cut into thin strips (“kizami-nori“). To preserve their delicate flavour and prevent them from absorbing moisture, always store them in dry, hermetically sealed containers.

It is very rich in proteins (35%). It is also especially rich in Vitamin A, very important for mucous membranes, skin and nails. It contains Vitamin C and B1. It has been claimed to contain B12 but studies related to this claim are controversial and inconclusive. It is said not to be available for use by the body as it is an analogue of this vitamin and would even compete with it.

It is indicated for dissolving and eliminating fatty deposits and helps to lower cholesterol. It contains minerals such as calcium, iron and potassium, and is good for combating anaemia. It is also helpful for digestion and as an accompaniment to fried foods and tempura. In short, nori seaweed is very good for people who have traditionally abused a more “yang“, heavier diet, rich in animal proteins and fats.

HOW TO USE IT IN COOKING?

Nori seaweed is the most famous seaweed because it is used to make traditional sushi and its endless combinations of shapes and ingredients. The most basic is made by rolling a quantity of rice and some other ingredient (tofu, vegetables, etc.) with the seaweed. It is also used to make “samurai balls”, filled with rice and with an umeboshi in the centre, or the famous rice triangles called “onigiri“.

It can be shredded once toasted and used in salads, stir-fries, soups, vinaigrettes, etc. It can even be used as a substitute for salt when making gomasio. There are also other forms such as nori seasoning, which is used as a garnish, or it can also be fried or tempura battered.

Either way, use your imagination and I recommend that you take a look at the different recipes on this blog that use nori seaweed and practice them to introduce this food into your daily diet.