Since the dawn of time, before science existed, human beings have observed the world and developed theories based on those observations. When we look at the world from the point of view of energy, like the ancient peoples in Asia traditionally did, we go back in history. We access a world that existed long before the development of scientific technology, the world of intuition and experience through observation.

In times so long ago they didn’t have the technology we have access to today. They couldn´t analyse things smaller than what the human eye can see. However, those people lived in contact with nature, they had a commensal relationship with it. That was how they saw themselves within the great order of things. They developed their intuition, their way of feeling the pace of nature, a form of deep instinct of union and interaction with the environment. Can these experiences be measured? Can intuition, emotion, or instinct be quantified? 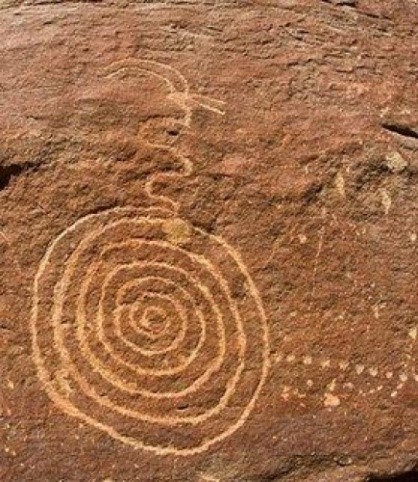 That’s what we mean when we talk about “energy.” This is what people in the Orient called “chi” or “vital energy“, which strengthens us, gives us life and flows within and through us. It is what we perceive when, for example, someone smiles at us but “perceives” that there is something that is not right. It is the “difference” that we feel walking through a pine forest or in a polluted city. The word “premonition” rings a bell for all of us.

In Asia they began to study how energy moves. They asked themselves: If really there is energy here, does it manifest itself in any particular way? And they began to see that nature likes to create spirals. It is one of the most common forms in which energy seems to be expressed. We see it both in the vegetable world and the animal world. It is as if nature is giving us a pattern, or communicating which are its universal laws. And so, we can find replicas of these patterns everywhere the ancient world (India, Pakistan, South America, etc.) carved in rocks and stones. 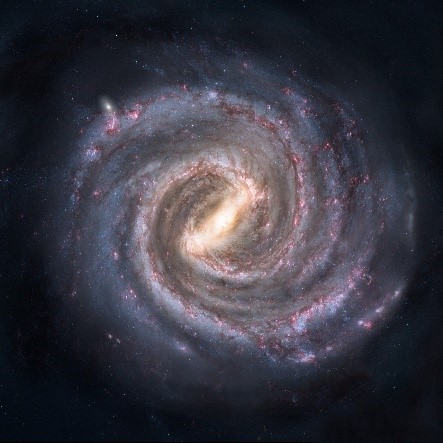 Why was it important to understand and abide by these laws? Because they were survival techniques. If you didn’t understand how nature worked, you died. Otherwise, just ask a sailor how important it is to learn about the movement of the tides or the clouds. I remember when I was little I lived in the countryside, we had an orchard that was cultivated of by and old farmer who was our neighbour. He had been a farmer all his life. It was fascinating to listen to him talk about this or that plant had to be seeded on a new moon because otherwise it would not take root. I was astonished by his great understanding of the laws of nature, something that in the cities we have somehow lost, due to our separation from the land that gives us life (for example: we no longer know what time of the year each vegetable is harvested). 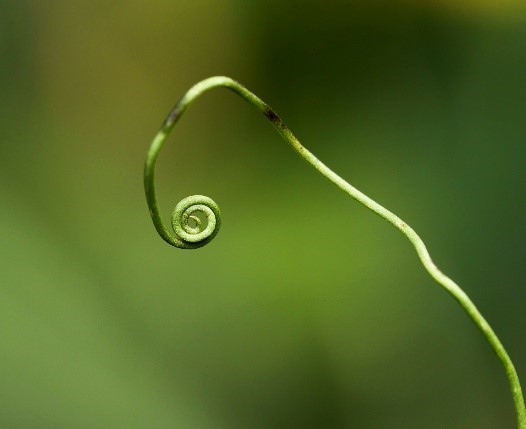 Everything is always changing in the universe, that is undeniable. Every day we experience this when day transforms into night, activity gives way to rest, youth is transformed into old age and life into death, and death into rebirth.

As I said before, understanding the changes that govern our lives and our environment, and recognizing the intimate relationship between the two opposite but complementary forces within these changes, helps us to achieve harmony in our body and soul.

We said nature likes to create spirals. But there can be no spiral without the chi (ki) it is actually a manifestation of. Chi expresses itself in two interacting tendencies within it, one with an outward tendency (yin) and the other (yang), opposed to it, with a tendency towards the centre of the spiral.

The principle of yin and yang lies at the base of the philosophy of macrobiotics. The way in which this universal principle is put into practice in daily life was taught by Lao Tzu, Confucius, Buddha, Moses, Jesus, Mohammed, and so many great teachers throughout history. To understand this simple principle and live by its basic laws is the best way to have perfect health and a long life. 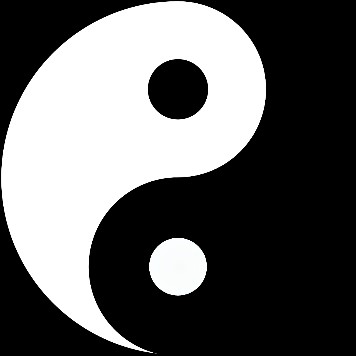 The principle of yin and yang is also called the “unifying principle” because it claims that these two antagonistic forces complement each other and are part of the infinite oneness. A clear example of this is man and woman. Although man and woman are opposites in many ways, they depend on each other to perpetuate the species. Together they form a unity in which each one of them incorporates aspects of the other.

As Olga Cuevas says in her book “El equilibrio a través de la alimentación”[1]: “Eastern philosophy is globalist, it regards all beings as inseparable from their environment, Earth and Heaven. Heaven rains electromagnetic energy on Earth in the form of solar rays and other star and planetary radiations; This descending energy “pushes” things down onto Earth, producing contractive effects. In turn, Earth behaves like a huge magnet and its movement generates an electromagnetic field that affects everything living on it. Its force expands away from the inside (moving away from its centre), producing expansive effects.

As we are on the surface of the Earth, we function as “aerials which get the electromagnetic forces from Heaven and Earth which charge our bodies with vital energy”. It is this vital force, the chi (or ki in Japan, prana in India, pneuma in Ancient Greece, ruah in Judaism, etc) which we mentioned before. According to Traditional Chinese Medicine, this chi flows through specific channels (known as meridians in acupuncture) vitalising our body and its organs, whose interaction determines our physical, mental and emotional health.

Chi has had many names throughout history across the world: chi in China, ki in Japan. As we have said, this energy, which is not measurable and has no equivalence in the western world, flows inside and through our bodies.

Georges Ohsawa (Nyoichi Sakurazawa) was the one who introduced this ancient philosophy to the Western world. His method was a practical one, as he claimed that we are living in a scientific, materialistic and practical period in the history of humanity. He studied yin and yang just as we observe and experience it in the world and in nature, in a practical and simple way: macrobiotics.

Macrobiotics focuses on the dynamics of yin and yang in daily life.

YIN is the name given to energy or movement that has a centrifugal or outward direction, and results in expansion. Thus dispersion, diffusion, expansion and separation are all yin tendencies.

YANG, on the other hand, denotes energy or movement that has centripetal, or inward direction and results in contraction. Fusion, gathering, contraction and organization are all yang tendencies.

On the other hand, we must take into account that there are other non-material aspects of reality (e.g., cold and heat, or activity and passivity). Olga Cuevas suggests using a kinetic criterion to classify these phenomena, that is, the perception of more or less movement. “We will label as yang all the functions that we perceive vibrating with accelerated intensity and we will label the slow ones as yin.” “We all know that heat expands the bodies and cold contracts them. Therefore, yang functions produce expansion in any structure and the yin functions produce contraction in any structure. Therefore, cold climates (yin function) produce root vegetables (yang structure) and warm climates (yang function) produce leafy vegetables (yin structure). That’s why in winter we shrink and in the summer we expand.”

We can find examples of yin and yang in all areas. Michio Kushi in his book “The Macrobiotic Way” provides the following examples:

Michio Kushi also adds that “the forces of yin and yang are the most basic and primary, and are found throughout creation. All movement, formation, change, and interaction can be understood in terms of a basic yin and yang equation. By looking at which of these energies predominates in plants, foods, or individuals, we can classify them as more yin or more yang”.

However, everything in life is relative, that is, it is measured through its relationship with something else it is compared against. Therefore, we are going to understand that nothing is completely yin or completely yang since those are just tendencies and so, with a deep understanding, we can learn how to create harmony and balance in our body and in our life. Yin and yang always go together, the heart or the lungs expand and contract, day cannot exist without night or cold without heat. Yin and yang are always transforming into one another. When something cannot get any colder (ice) it can only start to warm up (melt). After a war always comes peace and there always calm after the storm. Ohsawa always said that all phenomena hold within the potentiality of their opposite, which means that a problem always holds its own solution within it, potentially.

This is made clear in a text by Michio Kushi in the book mentioned before: “In everything there is a front and back. Macrobiotic theory suggests that the bigger the front, the bigger the back will be. For example, the huge military arms race and its implications for the future survival of human life (the front) have also created a global desire for world peace (the back). Modern society´s tendency to take a symptomatic approach to illness (the front) has created an inspiring revolution in health care called the holistic approach (the back). Our sedentary lifestyle and questionable habits (the front) have created a rapidly expanding natural foods industry spurred by people interested in improving the quality of our nutrition, and a widespread interest in fitness (the back). This is another illustration of the principle of balance like that which underlies the macrobiotic diet and lifestyle”. 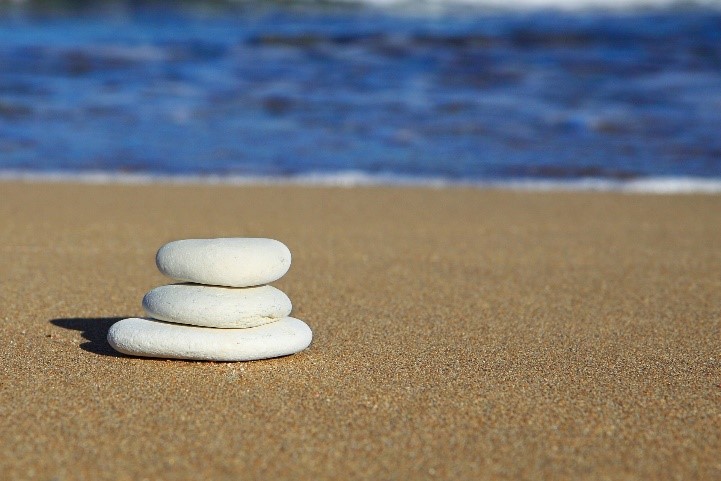